Prior to happening upon Koumi, which had it's grand opening two weeks ago, my favorite sushi restaurant in Korea was Sushi Town, located in Gangnam. However, after my second meal at Koumi, I'd have to say, there is no contest. KOUMI SUSHI IS HANDS DOWN THE BEST SUSHI RESTAURANT IN SEOUL.

Woah, all caps even.

They do not have menus in English however, Chef Kim speaks perfect English and besides, there's no better way to experience sushi than to have a conversation with the chef, let him know your likes and dislikes and he will create custom creations to suit your tastes!

Koumi offers a nice selection of Japanese beers and a fine sake menu as well. What's a round of sushi without sake? Kompai!

I live North of Seoul, finding Koumi Sushi is a god send, now I don't have to make the long drive or train ride to Gangnam for good sushi. It's right here close to home. And Nowon-Gu is an awesome suburb of Seoul, one of the hidden gems I think. One of those gems is Metropolis Bar, which is located on the other side of the train tracks from Koumi. I highly recommend a nice sushi dinner followed by drinks and darts at Metropolis.

The best sushi in Seoul deserves to be captured with the best camera on the planet, the Sony A7R. My new, 36 megapixel, mega-awesome mirrorless camera from Sony. I took it along with me and mounted the Sony Zeiss 35mm f/2.8 prime lens, which is a great lens for street photography. The photos below are shot with only the available light in the restaurant (low light) even so, you can appreciate the resolution of the full frame 36 mp sensor, it's awesome.

I enjoyed my meals so much that I offered my videography services for free to Chef Kim and will go back and shoot a nice You Tube video commercial for him. I've only done this once before, for Coreanos in Itaewon. But I really enjoyed this restaurant and wish Chef Kim much success in his new restaurant venture. Hopefully my blog post and video will help others to discover this amazing sushi restaurant near Seoul! 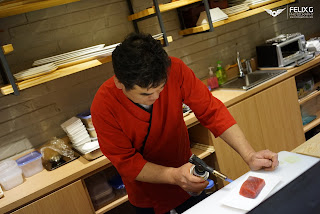 Chec Kim prepares our tuna tataki. I like that he prepares each dish from scratch. A lot of places with sear the tuna before hand, and who knows how long it sits before being served. At Koumi, you watch the chef sear your tuna right before your eyes! 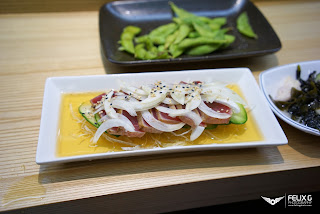 The tuna tataki was quite good as well. The tuna was extremely fresh and seared to perfection. The sauce was a little bland, however, that allowed for the taste of the fresh tuna to dominate my senses. 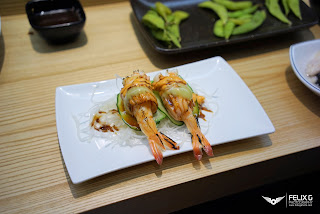 This was perhaps my favorite dish of the night, ask Chef Kim for an "S and S" which stands for shrimp and salmon, or salmon and shrimp, I'm not sure which comes first, either way it will delight your palate! Cooked shrimp wrapped in cooked salmon on top of thinly sliced cucumber. 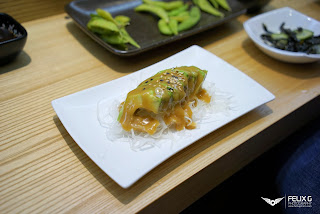 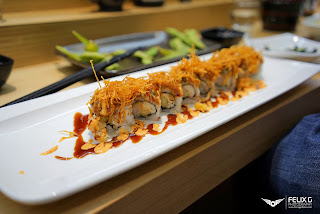 This wonderful roll is topped with crunchy pieces of fried sweet potato (Goguma), a very original way to use sweet potato on top of sushi. It was delectable! 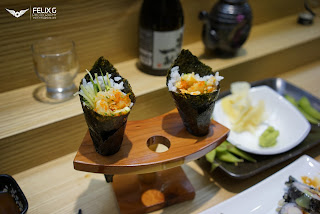 Chef Kim made us a pair of delicious hand rolls. 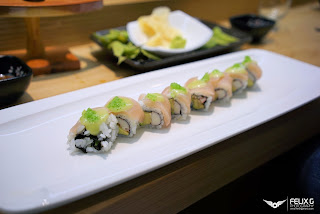 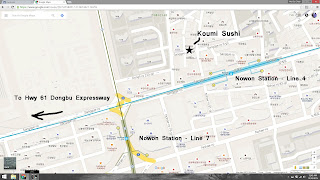 Located in central Nowon across the street from Nowon Station, Line 4 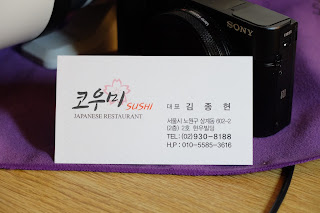 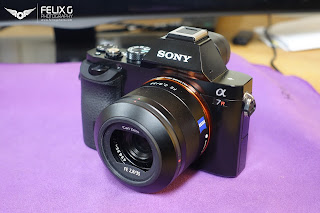 Posted by FelixGPhoto at 1:38 AM