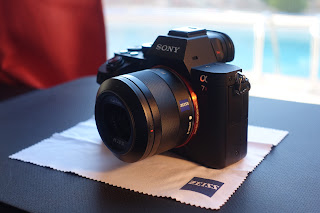 My heart sank. My friend and shooting buddy, Austin Armendariz was shooting with my Sony A7RII, he paused, turned to me and motioned toward the rear LCD screen to show me the displayed error message...


"Camera Error. Turn Power Off, Then On"

"No big deal", I said to myself, possibly out loud also, I don't recall. I turned the camera off, then on, however, the error still appeared. In fact, the camera didn't even turn off when I turned it off. Again, I thought, "No big deal". I moved on to the next logical step which was to remove the battery, then reinsert it. With the battery reinserted, the camera powered back on, the error message no longer appeared. Just a hiccup right? Wrong.

The very next time Austin pressed the shutter button, the camera again shut off and the same error appeared. Now I started getting a little nervous but still went through possible troubleshooting steps such as trying a different memory card and a different battery. It was to no avail, the error still appeared, the only way to power the camera back on was to remove the battery, then reinsert it, but that would lead back to the malfunction when the shutter button was pressed, leading once again back to the error message.

There was no time to fiddle faddle with the A7RII, Austin was shooting photos of a nice, young couple and the clock was ticking. The sun had already kissed the horizon and the sky would soon be void of ample light. Austin brought along a Sony A6300, which he had been using for the majority of the shoot anyway, so there was no down time due to the malfunction of the A7RII.

The photo shoot complete, we started heading back South, down Texas Highway 54, towards El Paso. In the passenger seat, I busied myself with a variety of Google searches pertaining to the error message, with the end result being that I had submitted to the fact that my beloved Sony A7RII had to be sent in for repair.

Unfortunately, and as Murphy's Law would have it, the warranty expired just two months prior, whatever the cost of the repair, I'd have to foot the bill.

I am Facebook friends with a Sony employee and photographer, Johnny Pham. Johnny is the PRO Support Manager and I have nothing but compliments to throw his way. Anyway, he's active on a variety of Facebook photography groups and that's where I "met" him. I figured I'd send him a message to see if perhaps he knew of an easy fix for this error. He suggested the same troubleshooting steps I had already tried and that was that. Regardless, I am grateful for his quick responses to my Facebook messages and I was treated as if I was already a member of the Sony Pro Support Team (I have downloaded the application and will be submitting my official request tonight).

Precision Camera is Sony's only authorized repair center and handles all of their warranty repairs and out of warranty repairs as well. Placing an order for repair is insanely easy. I think the prices are fair, however, I can't help but long for my days in Seoul, South Korea, where camera repair shops abound and prices for repairs are extremely reasonable, maybe half the price of getting something repaired here in the USA. But alas, I would not be traveling to Korea any time soon, my A7RII would soon be headed off to Precision Camera Repair.

Some one at Precision Camera deserves not only a pat on the back for their creativity and ingenuity, but also at the very least, a small raise. The system for getting a repair quote, printing out the order and following the progress of your repair (and the return shipping) is comforting and stress relieving. Getting your quote for repair from Precision is acquired via a drop down box. You simply select your make and model and you get a quote for the repair. The Sony A7RII is not among the options in the drop down box so I selected the Sony A7R and got a quote of $376.50 for the repair. Ouch. Add shipping and insurance on top of that and I'm looking at $420 plus dollars. (If only the camera had malfunctioned two months prior, it would still be covered under the warranty!) Ugh.

I said good bye to my A7RII at the UPS store, as if I was dropping off my child at day care for the first time and off it went across the country.

The turn around time was reasonable, I was able to ship it to Precision and get it back in less than 3 weeks. Needless to say, I was anxious to get my A7RII back in action, so when the return shipment arrived at my UPS box, I hurried home to slap a lens on it and test it out. However, I was soon to be disappointed.

Inside the box was the camera body, securely packaged in plenty of bubble wrap, with the final repair note attached with a rubber band. The note stated that the camera had been fully repaired, cleaned, tested and calibrated. Good, good. I attached a lens and turned the camera on, so far so good. The camera was in Auto Mode and I snapped a photo of my bedroom, it worked! However, when I pushed the "Play" button to view the image, nothing happened, no response. At first, I was only slightly alarmed, but when I started pressing other buttons, I discovered that NONE of them were responding! I tried turning the dials, no response either. The camera turned on and was in "Auto Mode" no matter what setting I had on the control dial, it would take a picture, but nothing else worked, no video, no manual mode, nothing.

I contacted Johnny Pham again to appraise him of the situation, it was a weekend, a Saturday I think, but he was still kind and courteous enough to respond to my message expeditiously, which was comforting because Precision Camera was already closed. First thing, that very next Monday, Johnny sent me a prepaid, overnight FedEx shipping label. I also called and emailed Precision to bring their attention to the situation and by Monday afternoon, my A7RII was headed back to Enfield, Connecticut (that's where Precision is located).

My frustration at this point is understandable. Firstly, I think that an elite camera body like the A7RII would be less prone to malfunctions such as the one I experienced. But after doing some research online, I found that I was not alone. The "Turn Camera Off, Then On Again" error is not entirely uncommon. There's no way of knowing exactly what percentage of A7RII owners have experienced this malfunction, but I was a little surprised at how many I came across on various forums, blogs and groups.

That error message might occur for any one of a number of types of malfunctions or problems with the camera. It's kind of a "catch all" error message. Some owners reported that the error came as a result of a problem with the sensor and were able to "solve" their issue by tapping or shaking the camera body. Others claim it's a problem with using non-Sony batteries, still others say the error is from formatting memory cards outside of the camera. But in reality, it could be anything. In my case I am fairly certain there was a malfunction with the shutter. The final repair noted also stated that the hand grip had been replaced, I think that the shutter mechanism is part of the hand grip assembly, I am not sure. In any case, when I got my camera back from Precision (the first time) it was not working, it was more broken than when I sent it in (I could still shoot video with it before I mailed it in for repair). 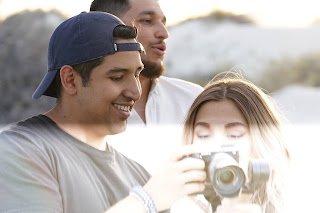 Here is one of the images which shows how an image was captured with the malfunction. Clearly, it appears that there is a problem with the shutter. The camera would display the error message but would not turn off when the power button was turned to the off position. It was "bricked" as they say. Removing the battery and reinstalling it would allow the camera to be turned off, then on again, but the same result would occur every time the shutter button was pressed. The camera would still shoot video and all other functioned also seemed to work.

So the final repair note stated that the camera had been fully tested and here's where we come to my only real issue with this entire experience. I find it hard to believe that my camera was "fully tested" before it left Precision Camera, unless, by some off chance, the buttons became non-working during the shipment process back to me, but that's probably not the case. Obviously, I have no idea what actually was or wasn't tested on my camera, but my guess is that the repair and cleaning was done and that some one attached a lens and turned the camera on, that person snapped a photo and observed that the camera captured an image, then turned it off, packaged it and sent it back to me, but it was never "fully tested". Again, that's just a guess. Because IF the camera had been fully tested, the non-responsive, non-functioning buttons and dials would have been obvious. So there's that.

On its second trip to Precision Camera, my A7RII must have gone right to the front of the line, because I had it back in less than 3 days and I am happy to conclude this blog entry with the news that my camera was repaired back to full working order and I have had no problems with it since I received it back the second time. Everything works fine.

Was the repair expensive? Relatively speaking, yes. But these are the going rates in the USA. If you don't want to pay these kinds of prices for repairs, buy the extended warranty or travel to Seoul, South Korea. Should my camera have been repaired and fully tested correctly the first time? Yes, of course. Was the customer support I received from Precision and Johnny Pham of Sony Pro Support adequate? It was outstanding! All emails and phone calls were answered and/or returned promptly. I was treated with courtesy and all of my concerns and issues were handle in a timely manner and in the case of the second return, my case was handled extremely fast.

A camera like the A7RII should not have malfunctions like this, especially not considering I have only used it minimally over the past year. My A6000 and A7II have a WAY higher shutter count and have been with me in austere environments on numerous occasions and I have NEVER had a problem of any kind with either of them. I hold the A7RII in the same regard as anything that comes from the Leica factory, but even hand-made, hand-assembled Leica's have problems from time to time.

Do I recommend that you get your Sony products repaired through Precision Camera? Absolutely, yes. No one is perfect but the end result is that my camera is back to working condition and all is well in the world. Thank you Johnny, thank you Sony and thank you Precision Camera for a job well done, overall.
Posted by FelixGPhoto at 6:42 PM