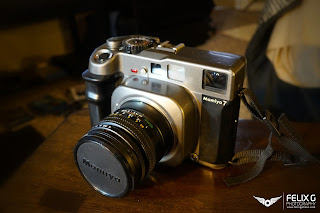 The Mamiya 7 is widely considered one of the finest medium format film cameras ever made, but a lot of photographers might not be aware that this fantastic camera can also shoot 35mm film with the optional panoramic adapter.

Panoramic images are images that feature wide horizontal angles of view (see the sample images below). Numerous modern digital cameras have the ability to capture panoramic images via software combined with the action of the user "panning" across the scene to be captured. However, with film cameras, capturing panoramic images require cameras designed specifically for this task. Cameras such as the Hasselblad X-Pan and Fuji TX-1 are just a couple of specialized panoramic film cameras.

The trick is that the area of the film exposed needs to be wide enough to capture the wide angle of view which is the hallmark of panoramic images. The Mamiya 7, being a medium format camera, has quite a large area (medium format) which is exposed to the film, with the addition of a special adapter, this area is constricted, so that 35mm film can be used to capture a panorama. 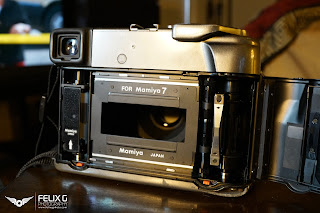 As you can see in the image above, the adapter exposes a wide angle of the focal plane to the film and is able to capture a panoramic image in the long, rectangular shape of the adapter.

The 3 images below are taken from my very first roll of 35mm film that I loaded into my Mamiya 7 utilizing the panoramic adapter. This really allows for a great deal creative opportunities and capturing fields of view that would otherwise be impossible with a film camera.

I recently purchased an Epson V600 scanner, which is a big deal because it's actually difficult to find photo labs that will scan panoramic images.

I look forward to shooting more rolls of 35mm panoramic images with my Mamiya 7 and you can rest assured that I'll share the photos with you!

Posted by FelixGPhoto at 4:16 PM